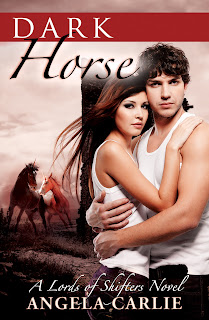 Right now, it's available on Amazon and Smashwords. Soon you may find it wherever eBooks are sold. Please let me know how you like it by leaving a review on the site you purchased it.

Have a great weekend!


Posted by Angela Carlie at 8:05 PM No comments: 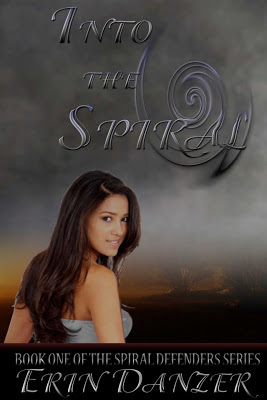 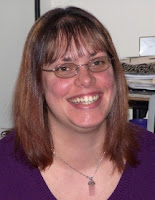 Just in time for the release of Dark Horse next week, Spider Wars went free on Amazon today. Of course it's also free on iBooks, Barnes and Noble, and Smashwords. Go get your copy today! 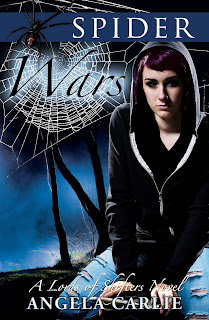 
Posted by Angela Carlie at 8:31 PM No comments:

My last blog post related to the Lords of Shifters series stated there will be one final novel after Dark Horse. Well, that was written before Dark Horse was complete. It turns out that there may be up to three novellas left in the Lords of Shifters Series. Stay tuned for the release of Dark Horse in the next couple weeks along with the reveal of the cover for the next book in the series. (I'm so excited to share it with you!)

I went to see Cloud Atlas tonight. I was nervous because the reviews I read prior revealed that this was a confusing movie and not many understood it. One of my clients this morning told me she enjoyed it, but was completely lost. She didn't "get it." If she didn't get it, how would I?

Since I have no one to have a conversation with tonight about this film who doesn't try to crack a joke or who rips a humongous fart right in the middle of my sentence (true stories), I'll discuss it with my blog. ;)

Cloud Atlas may be the most brilliant movie I've ever watched, and I think it's up for interpretation by the viewer as to what it's about. To me, it was about so much: karma, love, compassion, pain, fear, freedom, and has three main themes.

1. Throughout the ages, no matter how distant in the future or how far in the past, human nature is the same. There's no escaping it. We have two ways of thought. There are people who believe they and their kind are entitled over others and in an "order" or "hierarchy" usually fueled by greed and selfishness or maybe just a complete lack of regard for anyone other than themselves, and there are those who believe and fight for equality or just the simple right to live. This is shown in each of the stories told in Cloud Atlas. My favorite example is the one of the future and the slaughter house of the fabricated ones. Shocking. But truly, all the stories were brilliantly woven.

2. We are all from the same source. We live for each other or are bound to each other. What you do impacts me and everybody else. It's like the lines in the movie where one character says, "You are nothing but a tiny drop in a vast ocean." And the character other states, "What is an ocean but a multitude of drops?" (In real life, this frustrates me the most. I try very hard not to get upset at people, but it's difficult when they are so full of entitlement-- so, maybe this one can be classified as number 1 also).

3. Karma. Every kindness or cruelty you do today will come back to you in the future.

But it's also about so much more than just those three themes.

In sum, I'm going to be thinking about this movie for days. It was long, but so worth it. Don't go into this movie thinking it's a mindless three hours of entertainment. It is everything but mindless. Obviously, it's not for everyone. For example, some older gentleman walked out behind us and stated that it was the worst movie he had ever seen. I wanted to turn around and say, "Really?" My husband said on the way home, "That guy must not have ever watched Water World." haha ;)

Have you watched Cloud Atlas yet? What did you think?

Posted by Angela Carlie at 1:06 AM No comments:

Full throttle suspense with a dash of romance
just released! 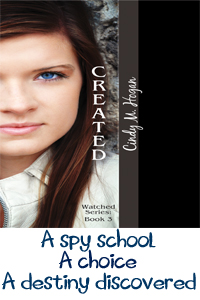 Created by Cindy M. Hogan
has been set loose
and you're going to want to pick it up!
Here's what readers are saying:

"Be prepared to spend the entire day doing nothing but reading because once you start Created, you won't want to put it down!" -C. Anderson, reviewer

"A remarkable balance between adventure and romance, leaving you hungry for more." -L. Sears, reviewer

Don't walk, RUN to pick up this fantastic series!

A few fun facts about Cindy
Pantser or planner?- Pantser
Favorite place to write? My office-it's surrounded by fabulous windows
Current read? A Spy Like Me by Laura Pauling
Beguiled by RaShelle Workman
Paranormalcy by Kiersten White
Any pets? I have a Great Pyrenees. He's huge and all white. His name is Indie 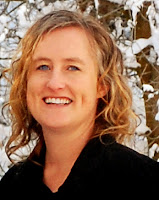 Want more information? Stalk Cindy in all these places (just click on the place and you'll go there)
Amazon
Barnes and Noble
Facebook
Twitter
Blog (sign up for her newsletter to get the latest scoop)
Goodreads