Forks and Other Stuff Happening

When you hear the word "Forks" what do you think of? The utensil. Choices in life's journey. The town in Washington where vampires and werewolves reside. I want to mention two of those conjured thoughts now.

I recently tested into a nursing school. Apparently my scores were in the top percentile, which surprised me. Well, even though the test said I can go to that school, I'm unable to because of financial reasons. I mean, if we scraped and stressed for the next two years, maybe, a very slight maybe, there would be a chance we could come up with the money. But realistically, I'd get halfway through the program, and I wouldn't be able to pay for the rest. So, it's probably best to go to community college. Sure, it will take triple the time to finish, and it's severely competitive to get into the program once the prerequisites are done, but that's a chance we'll have to take. I'm excited to begin my first class in September. Chemistry. Ooooh. Aaaah. Wish me luck!


And now for the town in Washington where vampires and werewolves reside. Did you know it rains there, like all the time? Ha! Not all the time, but it did rain when we stopped by last Monday. I'm told it was sunny and 70 degrees the day prior and the day following our visit. Figures, eh? 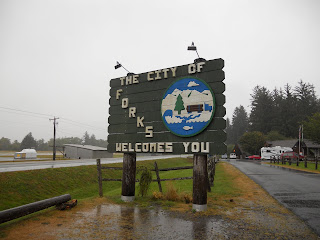 We also visited a beautiful rainforest on our journey north. Of course, it rained there, too. 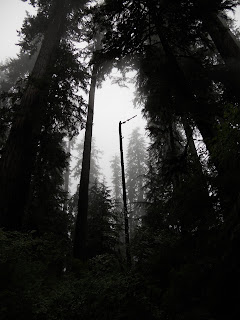 Now to the other stuff. October is going to be an exciting month. It's always full of awesomeness, but this year will be even greater because I'll be going on tour with three other YA authors, Stacey Wallace Benefiel, Lisa Nowak, and Rebecca Knight. We are in the scheduling venues and thinking up really cool tour name stage, but it's going to be rad! Here are a few of the stops already confirmed:

We are working on finalizing a few other locations, so check back for a list of dates in the near future.


One more thing -- Starting Monday, I'm going on a juice fast. I will most likely be grumpy and irritable the first few days, so if my presence seems sparser than normal on the social networking sites, this is why. The fast will only last about two weeks, and I'll be adding cooked and raw fruits and veggies on the third day, so it won't be so bad.


Another one more thing -- Don't forget that Loramendi's Story went on sale this month! It's still only 99 cents for the ebook on Amazon, B&N, and Smashwords. The paperback will probably be available on Amazon in the next week or two, too.


Peace out for now! Be safe and healthy!
Posted by Angela Carlie at 8:23 PM No comments:

To be extra sure that Loramendi's Story shows up on August 7th, I decided to hit the publish button today. Sometimes it can take a couple days and sometimes, like today, a few hours to become available. Barnes and Noble is still thinking about it while Amazon is already complete. Here's the link!

If you have a Kindle, you can now purchase Loramendi's Story for only .99 cents! Since this is the first book in the series (Lords of Shifters), I'm keeping the price low. It hurts, but I'm hoping it will help gain new readers.

I've been doing a lot of research into spiders lately for my next novel. They totally creep me out, but the research must be done. So, after spending a few hours reading and looking at pictures of the eight legged creatures, I crashed in the recliner for some much needed time with my Kindle.

My big pooch, Cookie, fell asleep at my feet.

Out of nowhere, a ginormous hairy spider scurried across the floor, straight toward Cookie. I pushed her head so she would stand, but she was out and didn't budge. The spider bolted straight for her cute pooch nose. I pulled her heavy face up to save her from the spider attack. She finally woke and helped me out by standing.

I maneuvered my Kindle toward the spider to capture it and then I brushed it off into the front yard.

Afterward, I danced around to make sure it wasn't crawling on me even though I clearly saw it scurry off in the other direction.

I pretty much saved my dog's life. I'm a hero.

Have a great night. I hope you enjoy Loramendi's Story!
Posted by Angela Carlie at 8:03 PM 1 comment:

I should feel busy,

but I don't. There have been some happenings in the works. Yep, happenings. Things that are going to happen.

First happening: I've been asked to participate in an event this weekend called "Art in the Heart." I'll set up my little table to display a stack of books and then sit my bottom in a chair. If you are in the Vancouver area, please come see me! I'll be sitting with some other awesome authors in front of the Angst Gallery.

Second happening: Loramendi's Story will be available for purchase this coming weekend. August 7th to be exact. It has received some lovely reviews thus far.

Third happening: Dream Smashers will be on a blog tour the week of August 8th! The Teen Book Scene has put together this awesome tour. I'll announce the stops this coming weekend.

Fourth happening: I received a letter in the mail last weekend informing me that I've been accepted into nursing school. Woo hoo! I begin this fall.

Fifth happening: Wordstock is just around the corner. I'm sure you read my whine in the previous blog about not being able to participate. That has changed! Although I won't be speaking, I'll be there with a few other fantastic local authors, ready to sign books. More information to come. (I'm really, super elated and hope I get to meet Maggie Stiefvater and Ellen Hopkins.)

Sixth happening: After Wordstock, I'm going on a regional tour with a group of authors including Stacey Wallace Benefiel and Lisa Nowak. I'll share the complete list of authors and dates closer to October.

A lot of happenings right there. How does all this make me feel? Happy, elated, stoked, nervous, scared...


I hope you'll stay with me for the ride! It should be pretty wild. :)
Posted by Angela Carlie at 7:38 PM 3 comments: