I've talked about this talented author a couple times before. We met a few months ago while on the Rain Boots Required YA Author Tour. She's smart, funny, and writes awesome stories. She was kind enough to answer a few of my questions about her writing and the Full Throttle series. 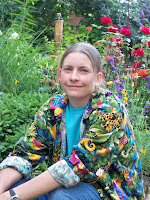 A Little About Lisa

Lisa is the author of Running Wide Open and Getting Sideways, a retired amateur stock car racer, an accomplished cat whisperer, and a professional smartass. She lives in Milwaukie, Oregon with her husband, four cats, and two giant sequoias.


A Little About Lisa Q and A Style

1. What inspired you to write this series? 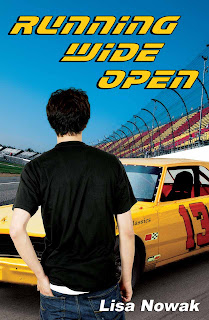 Getting to know the racing community. I was really impressed by this particular subculture of American society. They’re the kind of people who will fight fiercely on the track, then turn around and lend a part to a competitor in the pits. They’re willing to take anybody in as one of their own. Sure, they might think you’re a little odd if you don’t fit the mold, but since you love racing, you’re one of them. Not that they don’t have their rivalries and squabbles. But I guess all families are like that, right? In fact, that’s probably the perfect analogy. The racing community is like one big family. They might not like everything you do, but they love you, and they’ll stick up for you.

2. Who got you interested in racing? Tell us a little about your career as a race car driver.

There wasn’t really any one person who got me interested. I started teaching myself how to work on cars after I took the first one I owned (a ’72 Gremlin) to a shop and felt like I got ripped off. I’ve always been pretty independent (go figure, an indie author who’s independent) and a tomboy, so it was only natural for me to want to know how to work on my own car. That led to an interest in cars in general, which led to racing.

I started competing in the Street Stock division at Eugene Speedway in 1987. That was the community I truly fell in love with. I dedicated my first book to them. My most memorable experience there was rolling my car, and it was more fun than scary, though the repairs afterward weren’t exactly a picnic. After four years, I moved to Hickory, North Carolina because I was obsessed with the sport. Back then, if you lived anywhere but the South, only diehard fans cared about it. I spent almost five years there, racing at Hickory Motor Speedway and Tri-county Speedway, but I wasn’t very competitive. I’d say I spent more time learning how to build cars than driving them. It was a valuable experience, though, because I really came to enjoy the metal fabrication process. In 1995, I moved back to Oregon and raced at Portland Speedway in the Limited Sportsman division until they tore up the asphalt and went to dirt in 2000. They closed entirely the year after that.

These days I sponsor a driver at Sunset Speedway. Last year it was a 12-year-old boy, and next season it’ll be his 15-year-old brother, who took the Pure Stock championship in 2011 before he was even old enough to have a drivers’ license. Being a sponsor is so much less stressful than building and driving a car. Stock car racing can be a fairly high-contact sport, even though it’s not intended to be, which results in a lot of maintenance and repairs. It’s like having a second full time job, only one that takes all your money instead of paying you.

3. Gardening and racing. Two occupations at opposite ends of a spectrum, yet you enjoy them both. One is full of excitement and adrenaline, and the other, well, not. Does one cancel out the other to keep you balanced? What aspects of each do you love the most?

“Balance” is a good way of putting it, Angela. In fact Cody (my MC) talks about that very concept in Getting Sideways, only the “yin” to his racing “yang” is karate. I was just getting into gardening when I was driving, and it did seem to be therapeutic. Now, as a landscaper and a writer, I’ve found that the physical aspect of the landscaping balances the mental aspect of writing. It’s been very helpful to me to have two distinctly different ways to spend my time. When I’m getting too much of the one, I can rely on the other to bring me back into balance. 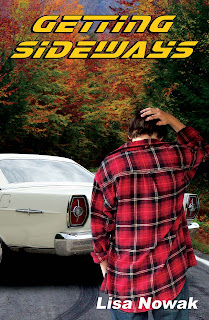 4. What more adventures are in store for Cody? How many books can we expect from this series?

There are five books in the series, but they’re not all written from Cody’s point of view. After the first two, Jess comes into the picture. She’s Cody’s love interest. Only she’s not really that hot on having a boyfriend, especially not Cody. She mistakes him for a player and doesn’t want anything to do with him at first. As the daughter of an alcoholic, and a girl mechanic struggling to be taken seriously, she has some trust issues. Jess narrates Driven and Redline, which will be published in 2012. The last book, which doesn’t have a title yet, is written from a split POV.

5. What is one question that you'd like to answer that hasn't been asked of you yet? And answer the question.

Why did you write a contemporary realistic boy book? Are you flippin’ crazy?

I guess I probably am. I never thought about marketing when I started this series, I just wrote about a subject that was near and dear to my heart. Writing from a boy’s perspective is a lot of fun for me. There seems to be a fifteen-year-old boy living inside my head, and frankly it kinda sucks because he hogs all the pizza.

Thanks for hosting me, Angela. :)

Running Wide Open and Getting Sideways are now available! I know you'll want to purchase them now, so here are the links:

Getting Sideways: Amazon, Barnes and Noble, and Smashwords.

To find more about Lisa, you can check her out on these sites: