Someday Famous YA Author is a series of interviews with awesome authors, famous now or future famous, who write for young people.
Addison Moore has gotten around since March 26th, 2011. Her name has graced the screens of more Kindles and eReaders than many best sellers--in only less than a two month period. She's been called "The Next Indie Sensation" and "Indie Phenom." That's a lot to live up to, but I'm here to tell you her debut novel, ETHEREAL, lives up to the rumors and name calling.


Many authors dream of seeing this screen shot I took tonight. (I totally just learned this little trick. You should be proud and tell me how awesome I am now. Google taught and proud.) 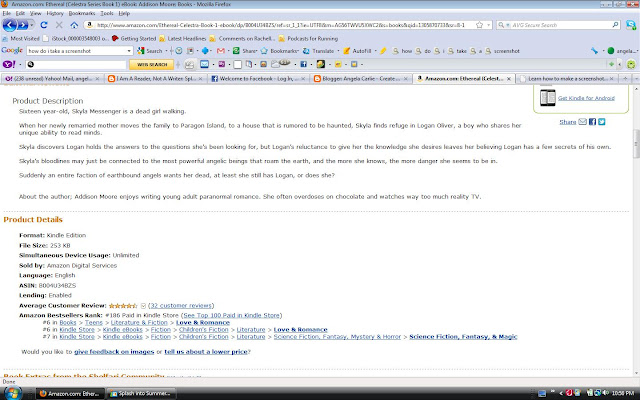 Can you see it? It looks a little blurry to me, but you'll have to trust me when I tell you that ETHEREAL ranked #186 in the Paid Kindle Store, #6 in two categories, and #7 in one. That shot would make any newly published or long-time published author smile for a month.

When her newly remarried mother moves the family to Paragon Island, to a house that is rumored to be haunted, Skyla finds refuge in Logan Oliver, a boy who shares her unique ability to read minds.

Skyla discovers Logan holds the answers to the questions she’s been looking for, but Logan’s reluctance to give her the knowledge she desires leaves her believing Logan has a few secrets of his own.

Skyla’s bloodlines may just be connected to the most powerful angelic beings that roam the earth, and the more she knows, the more danger she seems to be in.

Suddenly an entire faction of earthbound angels wants her dead, at least she still has Logan, or does she?

How cool is that? Very.
I'd like to introduce you to an awesome author, who happens to also be super nice, (Someday) Famous YA Author, Addison Moore. 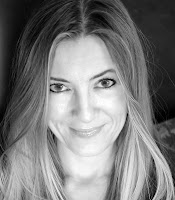 Addison:
Angela, first, thank you so much for hosting me on your blog! I’m thrilled to be here!
Me:
The pleasure is mine.
I bought ETHEREAL a week or two after it came out on Kindle. It sat in the device until last week when I had a moment to pick it up. Then, I couldn't put it down. I totally fell in love with the characters, Skyla, Logan, Gage... I won't talk specifics so the peeps who haven't read the novel won't be upset, but I'll say that the tension between the characters was perfect. I sometimes felt so angry and hurt right along with Skyla. (And sometimes I wanted to slap her.)
What or who (or both) inspired you to write this story and these characters?
Addison:
Thank you for your kind words. I really enjoyed writing this story. It’s actually a marriage of two stories that I abandoned years ago because I pantsed (writing with no outline)  myself into a corner with both of them. It was the characters that kept drawing me back to the island. I just couldn’t get them out of my mind so I fashioned a unique storyline just for them.
Me:
ETHEREAL just came out and it's been received very well as far as I can tell. Have you been given much feedback from readers other than the reviews? If so, what's one of the best things someone said that made you feel all warm and tingly inside?
Addison:
Oh my gosh. I cannot tell you how amazing it has been to receive emails, DM’s, tweets, blog comments, facebook messages, and messages on goodreads! I have been blown away by the response by readers and their kind words about my story. Mostly people want to know when book 2 is coming out. And that makes my day every single time!
Me:
Tell us how you came about publishing ETHEREAL. I noticed you have an agent, but did you publish this novel independently or through a publisher? What's the scoop?
Addison:
I self-published Ethereal and plan to do so with the rest of the series and other projects as well. My agent came about after Ethereal was out for three weeks and I’m very excited about the future.
Me:
You left ETHEREAL at a point where I wanted to turn the page and keep reading, but couldn't. Now I'm super excited to read the second novel, TREMBLE. Please tell us a little about it.
Addison:
TREMBLE is ready to launch as soon as next week. The tension between Sklya, Logan and Gage really heats up when Sklya starts to develop feelings for Gage as well. A new character is introduced and really turns Skyla’s world upside down.
Me:
Here's a couple of easy questions for you.
What is the last book you read that you'd like to recommend to others and why?
Addison:
I didn’t just finish it, it was probably a few books back, but I have to recommend THE BOOK THIEF. What an awesome novel with an amazing premise. And how can you go wrong when the narrator is death?
Me:
I'd normally ask what your favorite food or drink is, but I read somewhere you drink Dr. Pepper and overdose on chocolate often. So, I'll ask something else: Who is your favorite super-hero and why?
Addison:
I’m pretty sure she’s the antithesis of a super-hero, but I’m going to say Cat woman. Every since I was little I’ve had a fascination with that sexy costume of hers. Can you blame me?
Me:
Is there anything you'd like to add?
Addison:
Celestra series coming out sometime this summer. Book 3 will include Chloe’s diary in its entirely. I’ll have the cover for that one up my blog soon. =)
Me:
Thanks again, Addison! And congratulations on the success of your novel. I wish you the best.

Addison:
Thank you for hosting! I had a blast!
Addison Moore is a USC graduate who enjoys writing young adult paranormal romance. Ethereal is her first published novel in the Celestra series. She lives with her family and two dogs on the west coast.

Coming Soon! TREMBLE (Celestra Series Book 2)
Buy Ethereal on Amazon
Follow Addison's Blog
If you enjoyed this interview, please follow my blog. There will be more great interviews like this in the future. Have a great weekend! Peace out for now.
Posted by Angela Carlie at 11:38 PM