Introducing the next Lords of Shifters Novel - Dark Horse

Writing. It's one of the most difficult jobs I've ever had. It doesn't come easy to me like it does so many other writers. You know, the awesome authors who can put out several books a year. Difficulty is one reason I love it so much. It's a challenge. Sometimes a downright battle, but it's so worth it. The satisfaction of creating a story that touches a heart or makes someone think or entertains for a short while makes all that hard work seem like no big deal.

That said, I'd like to introduce you to my new work in progress. I'm giving you the title, the lead characters, the blurb, and the cover (created by my favorite cover artist, Robin Ludwig Design). You'll have to wait until late summer / early fall for the book.


Say hello to Amethea and Cerus.


Dark Horse - A Lords of Shifters Novel
by Angela Carlie


When she meets another, Cerus, everything changes.


Together, they harness more power than Amethea ever dreamed. But is it enough to take down the Lords of Shifters? 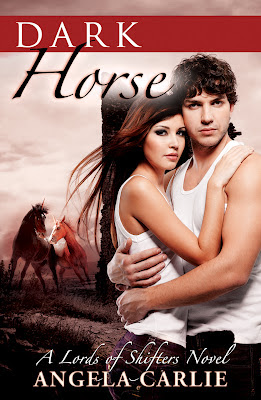 And now, Amethea has a few words before I let you go...

I am Amethea--the last of the unicorns. The only living daughter of Grane and Epona. My family was slaughtered before my eyes for their magic. Xifan saved me and raised me in the dark underworld of Hornbrood where I learned to use some of my magic in ways to inflict harm on those who must suffer for their sins. I made a vow to avenge my family, and I will keep my promise. No matter the cost. Even if it kills me.

Posted by Angela Carlie at 9:00 PM