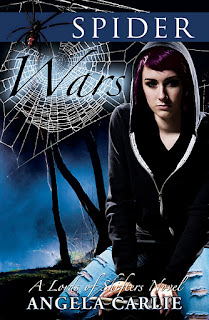 When he woke that evening, he didn’t expect to look his fear in the eyes. All four or six of them, depending on which one stood before him at the time. Eight gangly long legs, shifting left and right, protruded from two fuzzy globes connected in the center.
Spiders.
They covered the floor, a moving carpet of legs and eyes and dagger hairs.
A virus of terror rushed through his limbs, solidifying them in place. His body a potential carcass to be devoured by tiny fangs.
Every surface of the room, the walls, the ceiling, and the only exit, moved in waves of spider parts. Big and small, brown spiders, black spiders, green and yellow, traveled up his legs and over his muscular body.
In his century of life, he’d never known terror like this. If these creatures ate his body, he’d walk the earth as a soul forever. He wasn’t ready for that yet.
Hair-like legs scurried over his unshaven cheek. He gathered every ounce of strength he had and broke his limbs free of their paralyzed state. He jerked and gyrated to shake the creepers off, but they stuck to him like maggots to rotting meat. They burrowed under his skin, sucking his body dry of life fluids. Dehydrated and close to mummified, he dropped to all fours and crawled through the masses, crunching tiny lives into smashed bits under his hands and knees as he moved for the exit.
The door swung open. A young woman with fiery hair and a tattered black corset dress cast a shadow into the small room. The carpet of crawlers scurried away toward the back wall. Spiders shot out of his mouth and ears as if he was possessed—they backed out from under his skin, fleeing from the woman.
She drifted into the head of the room, a goddess, a monster.
Two others joined her, their faces unrecognizable in the dark, but their hair glowed from the moonlight behind them. A blond and a dark brunette.
The dark haired woman nudged her long limbs past the redhead. “Children,” she hissed. “The time is near to prove to the humans your place in this world is not under their feet, but to put them where they belong, wrapped in a web and on dinner plates.”
The surface of the walls and ceiling bubbled with movement, down to the floor where he lay helpless, void of hope. His internal tissues had already begun the regeneration process as he rested on the dirt floor, realizing the horror of the woman’s words. His heart burned from new tissue growth out of half eaten muscle, but he held onto the groans of pain. His breath rattled in his chest, his body’s attempt to clear the venom the spiders left behind.
“That’s right, my children. Feed on this wretched immortal. Gain your strength. You’ll need it for the battles to come.”
The floor snapped alive. This time, he didn’t have time to scream. Even if he wanted to.
Posted by Angela Carlie at 7:59 PM 2 comments:

It's A Little Haywire by Elle Strauss

Fellow Indelible author, Elle Strauss, has a new release for kids grades 8-12. I haven't read it yet, but I'm looking forward to it! Why? I can give you a few reasons right off the bat.

1. The description is awesome (and a little creepy) -- check it out below. 2. The cover is sweet. 3. The story takes place in the Pacific Northwest. All my stories are set in the Pacific Northwest, so it's interesting to discover how other authors bring this beautiful place to life--especially my home state of Washington. 4. It's illustrated!!! Duh. How neat is that? Very. 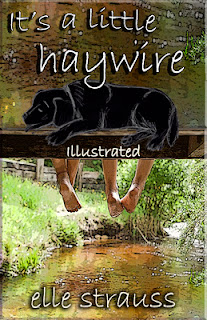 Click on the cover to go straight to Amazon and download your copy for
FREE
on February 22 and 23 only.

Owen True is eleven and eleven twelfths and has been "exiled" to the small crazy town of Hayward, WA, aka, Haywire, while his mother is on her honeymoon. All he has to whittle away the time is the company of Gramps, his black lab Daisy, and his Haywire friends, Mason and Mikala Sweet. They don't look so hot this year, in fact, the whole town has gone to pot since the mill shut down.

Owen has his first encounter with a real life homeless man who ends up needing Owen's help in more ways than one. But how does a rich city kid help the small town's suffering citizens?

And what is Owen to make of the fog train and its scary, otherworldy occupants that appears out of thin air on the old tracks behind Gramps' house? Do they have the answer Owen is looking for?

Praise for IT'S A LITTLE HAYWIRE

"Strauss' characters are absolutely precious, especially Mikala. Your heart just breaks for her and her family. And Owen was a funny little toot, with a heart of gold. Just because you are young doesn't mean you can't help a community in need!Such a wonderful little read, that brought a tear to my eye at the end." -  Mandy at twimom101 book blog- book reviewer

"IT'S A LITTLE HAYWIRE reminds me of Because of Winn Dixie by Kate DiCamillo. It's that good....I loved the magic in this story. I mean the magic of story, a great story, the kind that pulls you in and makes you care about the characters. Elle Strauss does a wonderful job of pulling everything together at the end in a moving way."  - Laura Pauling - book blogger,  book reviewer
Posted by Angela Carlie at 12:30 AM 1 comment: 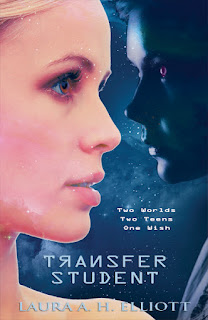 TRANSFER STUDENT is a science fiction Freaky-Friday romance/adventure about two normal teenagers struggling to survive high school and deal with their parents… typical rites of passage. The twist? One teen is an alien from the planet Retha. In a galactic teleporting experiment gone wrong, Ashley, a Beverly Hills High surfing fashionista, and Rhoe, the biggest geek on planet Retha, swap lives. Only by surviving life as their biggest nightmare do Ashley & Rhoe discover their dreams. How far would you go for someone you love?

Giveaways include free ebooks of TRANSFER STUDENT, Amazon gift cards and weekly surprise gifts that are out of this world!