It's time to tell you about my next novel. LORAMENDI'S STORY is the first book in the Lords of Shifters novels. It will be out this August. I'll announce some awesome opportunities on how peeps can get their paws on an e-Arc soon! For now, just check it out and enjoy. 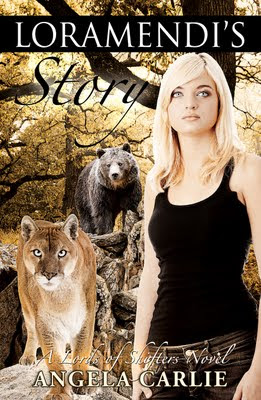 Lora wants nothing more than to be the wind behind sexy windsurfer Chance's sails. But fulfilling that wish just became...complicated. After seventeen years of normal life, someone wants Lora and her family dead. And the attempted massacre isn't nearly as strange as the reason behind it.
Available on an eReader near you in August, 2011.
Posted by Angela Carlie at 11:10 PM