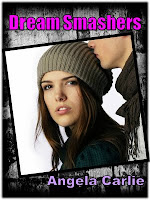 Autumn meets Rainy from Chapter 12
Dream Smashers by Angela Carlie -- all rights reserved
Available as an eBook for only $2.99 and paperback for only $11

Our meeting was just one of those things that happened. On the first day of kindergarten Gramps stood next to me at the corner, waiting for the bus. He held my lunch box and backpack for me until the bus squeaked and then psshed to a stop. It seemed like a giant banana until the doors opened, and then it seemed like a jungle. All kinds of noise escaped from those opened doors, none of it sounding the least bit safe. Screeches, giddy laughter, yelling, crying, sneezing, coughing, all struck me as terrifying and crazy.
Gramps nudged me toward the gaping mouth of the bus. I tried to stay brave while he threaded my arms through the backpack straps and handed me my lunch box. “Chin up, kiddo. You’re going to meet some of the best friends of your life on this bus.” He winked at me, giving me superhero strength.
I climbed up the stairs, turning at the top to wave at him before the doors slammed shut. I found a seat next to a window and held the fire behind my eyes and down my throat from escaping. The bus moved forward.
Two houses down, a girl my age with a sprinkler of hair plopped on top of her head, scurried from a house. Her arms flapped like wings, signaling the bus to stop.
Air somehow forced itself over my vocal chords and out my mouth. “Stop!”
The driver jerked the bus to a stop and opened the doors.
The girl, out of breath, slapped her body down next to me. “That was close!” She opened her lunch box, the very same lunch box that I held on my lap—a pink plastic Barbie box. Her box didn’t hold items of nourishment though. Instead it held glittery lip balms of every flavor imaginable. Grams never had the extra money to buy me lip balms when I asked each week at the grocery store. And the girl had an entire lunch box full. We’ve been friends forever since that day.
Posted by Angela Carlie at 11:57 AM